In light of the recent spike in antisemitic incidents, our goal with this campaign is to stop the proliferation of antisemitic themes and statements on social media. Each week, we’ll be sharing on social media a critique of a piece of hateful propaganda, with the goal of educating the general public on how to recognize antisemitic content.

In some cases, people share this type of offensive material because of deep-seated hatred. But in many others, people share content without understanding its offensive message. Some people may look at a photo filled with hurtful stereotypes and not realize exactly what it means or how harmful it is.

As always, our goal is to educate the public on how to recognize damaging stereotypes and fight back against them. We want to ensure that the next generation has the tools and knowledge to help push us all towards a more tolerant future. 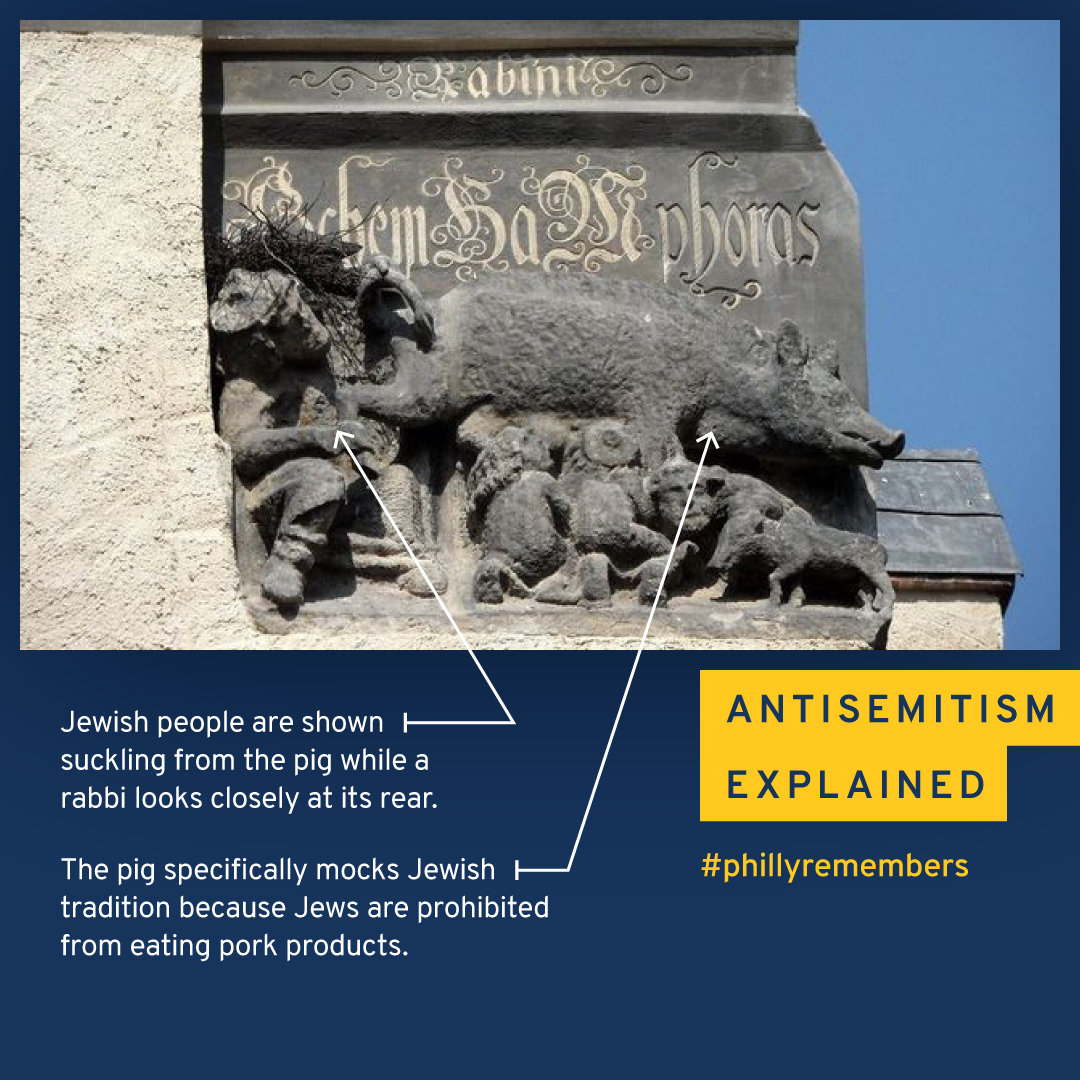 judensau, or the Jewish pig

How often do you look closely at the buildings around you? Really closely? In Germany you might see the judensau, or the Jewish pig. There are around 30 churches with stone carvings dating back to the 13th century depicting Jews doing various distasteful acts with pigs. This imagery is meant to mock Jewish people, as in the kosher tradition Jews do not eat pork and pigs are considered unclean. This image in particular is from the church in Wittenberg where Martin Luther preached, and has a stone judensau showing a rabbi inspecting the sow while several people suckle from the animal. Jewish communities have demanded the removal of the carvings on churches throughout Germany but have hit barriers with some preservationists and historians. The tension between preservation and reconciliation can be challenging and is certainly seen all over the world. 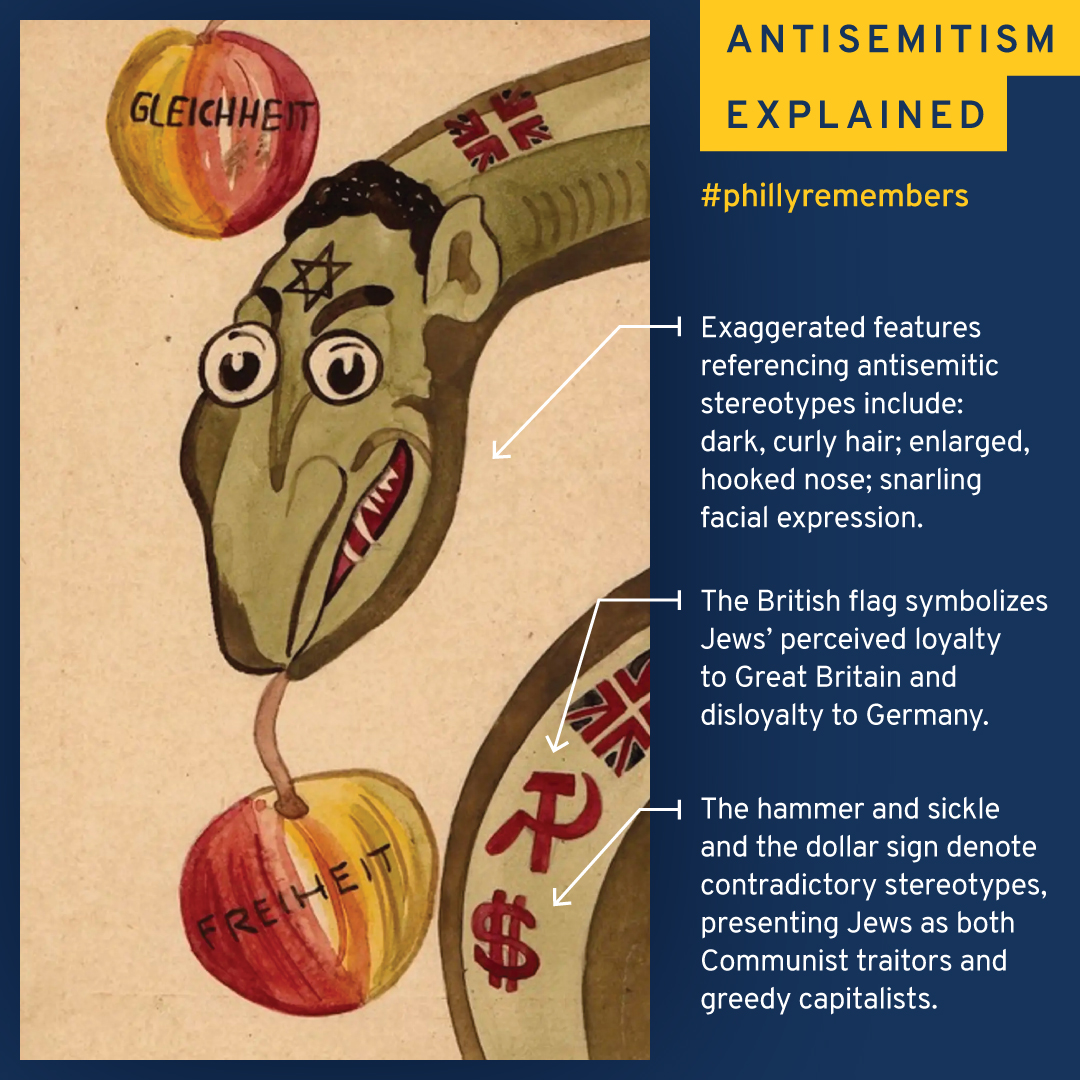 Propaganda Poster with Snake and Apples

This segment of a Nazi German propaganda poster employs the antisemitic trope of Jews as snakes to indicate that Jews are cunning and untrustworthy. By arranging apples reading “freiheit” and “gleichheit” around the snake, this image blames Jews for the expulsion from the Garden of Eden while simultaneously indicating that Jews control Germans’ basic freedoms. The snake’s stereotypical facial features, along with references to money, also draw upon antisemitic associations.

An early iteration on this theme, this 1900 poster housed in the collections of the National Library of Israel depicts Alfred Dreyfus as a hydra. Dreyfus was a French Jewish army captain wrongfully convicted of treason in 1895; this incident, referred to as the Dreyfus Affair, shaped French politics for decades, and demonstrated to Jews worldwide that even a highly decorated and assimilated Jew could be the victim of pernicious antisemitism. For additional historical examples of propaganda showcasing the trope of Jews linked with serpents, visit the United States Holocaust Memorial Museum’s online collections (1, German poster from 1941; and, 2, Austrian poster from 1919-1920).

The antisemitic trope linking Jews with snakes is often associated with the trope of Jewish disloyalty. As such, it is not surprising that references to Jews’ perceived treason and disloyalty is referenced in this image as well. Visit the ADL’s Antisemitism Uncovered resource to learn more about this theme. 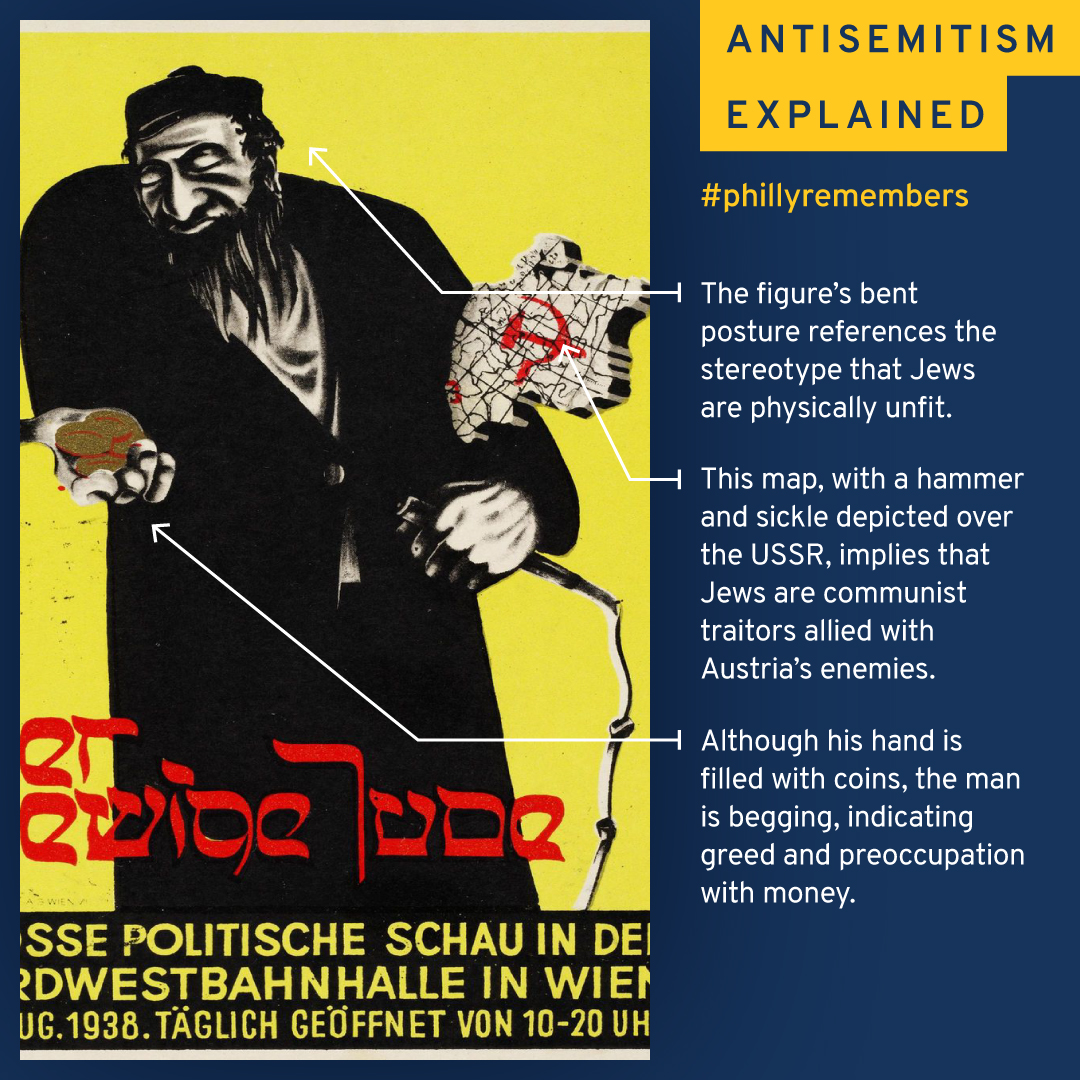 Originally created to popularize the anti-Semitic film “Der Ewige Jude”, translated as “The Eternal Jew,” this Nazi propaganda poster from Vienna, Austria (circa 1938) purports to demonstrate the alleged destructive influence that Jews wielded over Austrian society. The figure in this picture is easily identified as an antisemitic caricature, with a large nose, heavy eyebrows, long beard, and thick, curly hair, paired with a skullcap and overcoat meant to reference traditional Jewish styles of dress.

Der Ewige Jude was a film created by the Nazi German Ministry of Propaganda, filmed as a pseudo-documentary. This film depicts Jews as unclean and disease-ridden by comparing Jews to teeming swarms of rats, and characterizes Jewish ritual practices as disgusting, foreign, and dangerous in an effort to stir up antisemitic foment. Importantly, Der Ewige Jude ends with a speech by Hitler proposing “the annihilation of the Jewish race in Europe.”

Purported links between Jews and disease are hundreds of years old; see this 1720 edict from the USHMM collections issued by numerous European rulers barring Jews from entry due to concerns that Jews would spread disease in their borders. Conversely, Jewish populations have also been compared to diseases; see this French poster dated 1942-1945, reading “Tuberculosis, Syphilis, Cancer are curable…it is necessary to finish the biggest curse: The Jew!!” Ultimately, Jews were indeed victims of disease during the Holocaust as the result of unsanitary and overcrowded conditions in ghettos. Yet, Nazis used the skyrocketing rates of illness resulting from these abhorrent living conditions to identify Jews as agents of disease transmission, and that they must therefore be eliminated; see this 1941 Polish poster from the USHMM’s collections comparing Jews to lice, and identifying them as typhus transmission vectors. 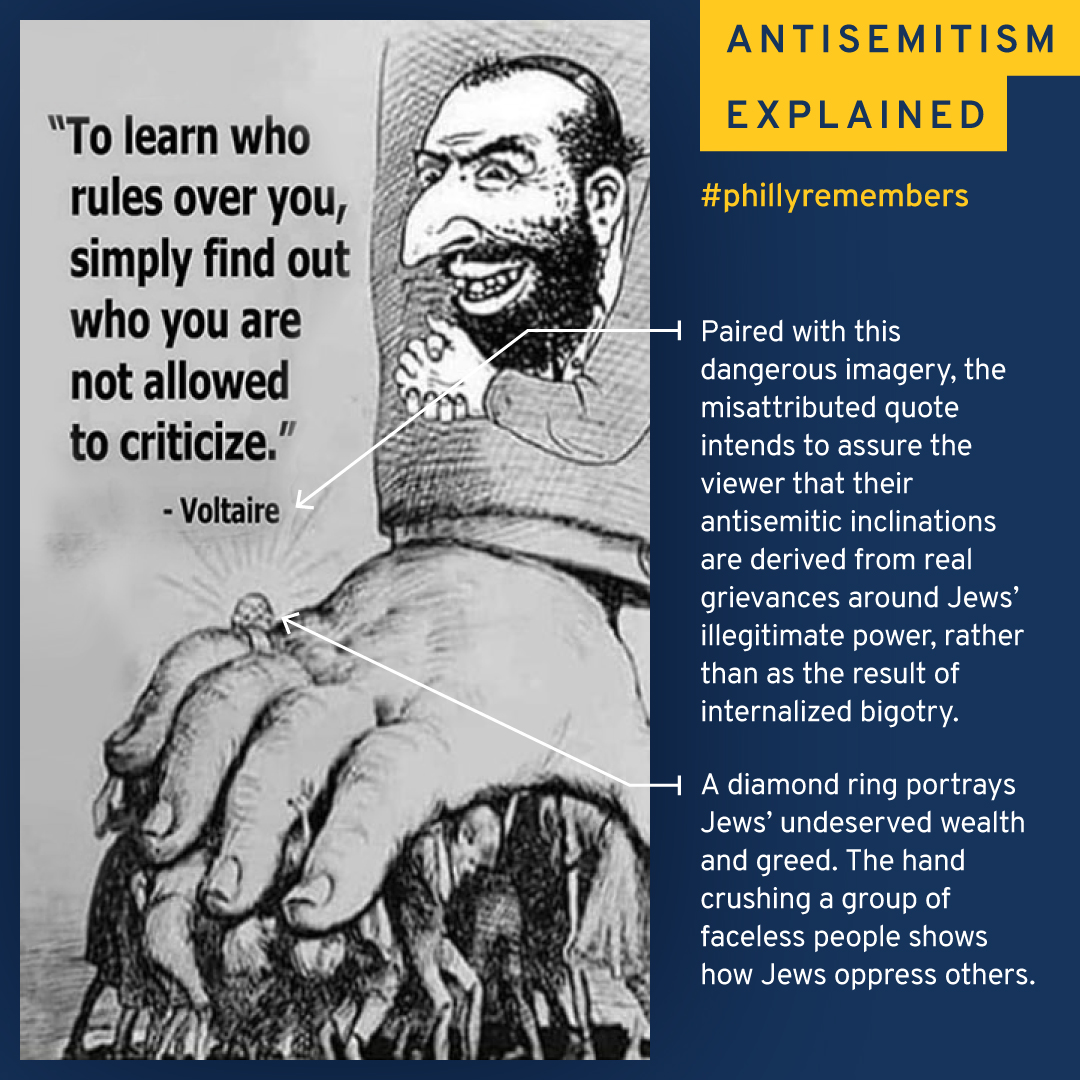 With a skullcap, unkempt eyebrows and hair, heavy beard, large nose, and conniving facial expression and hand gestures, the figure in this picture, termed “the Happy Merchant,” first appeared in the early 2000s, and is now a common feature in antisemitic online forums. While this specific meme may be new, its roots lie in pre-Holocaust European antisemitic imagery. Paired with this dangerous imagery, the misattributed quote intends to assure the viewer that their antisemitic inclinations are derived from real grievances, rather than the results of internalized bigotry.

A fixture on forums such as 4chan and Gab, two major online outlets frequented by members of the alt right, The Happy Merchant has been adapted into a wide variety of antisemitic and otherwise bigoted images, gifs, cartoons, and more. Also called “Le Happy Merchant,” “Merchant Face,” and “Jew Face,” the Happy Merchant often serves as an antisemitic shorthand, and is frequently paired with text mocking Jews’ grief over the Holocaust or supposed intent to oppress others.

The hallmark characteristics of the Happy Merchant appear in antisemitic content stretching back hundreds of years. Perhaps the most obvious feature meant to indicate the Happy Merchant’s Jewishness is his dramatically oversized nose. References to Jews having large noses date as far back as the 12th century; yet, the stereotype is based in negative connotations associated with large noses rather than in any actual physical traits. The Happy Merchant’s messy appearance serves as a close cousin to the antisemitic stereotype of filth and disease spread.

Images emphasizing Jewish greed and excess often feature references to diamonds and jewels, often shown in relation to people with limited means or those whom a Jew is attempting to persuade under his influence (1, from 1902 New York; 2, from 1910 Great Britain; 3, from London, date unknown; 4, from 1920s Germany; and, 5, from 1906 US). 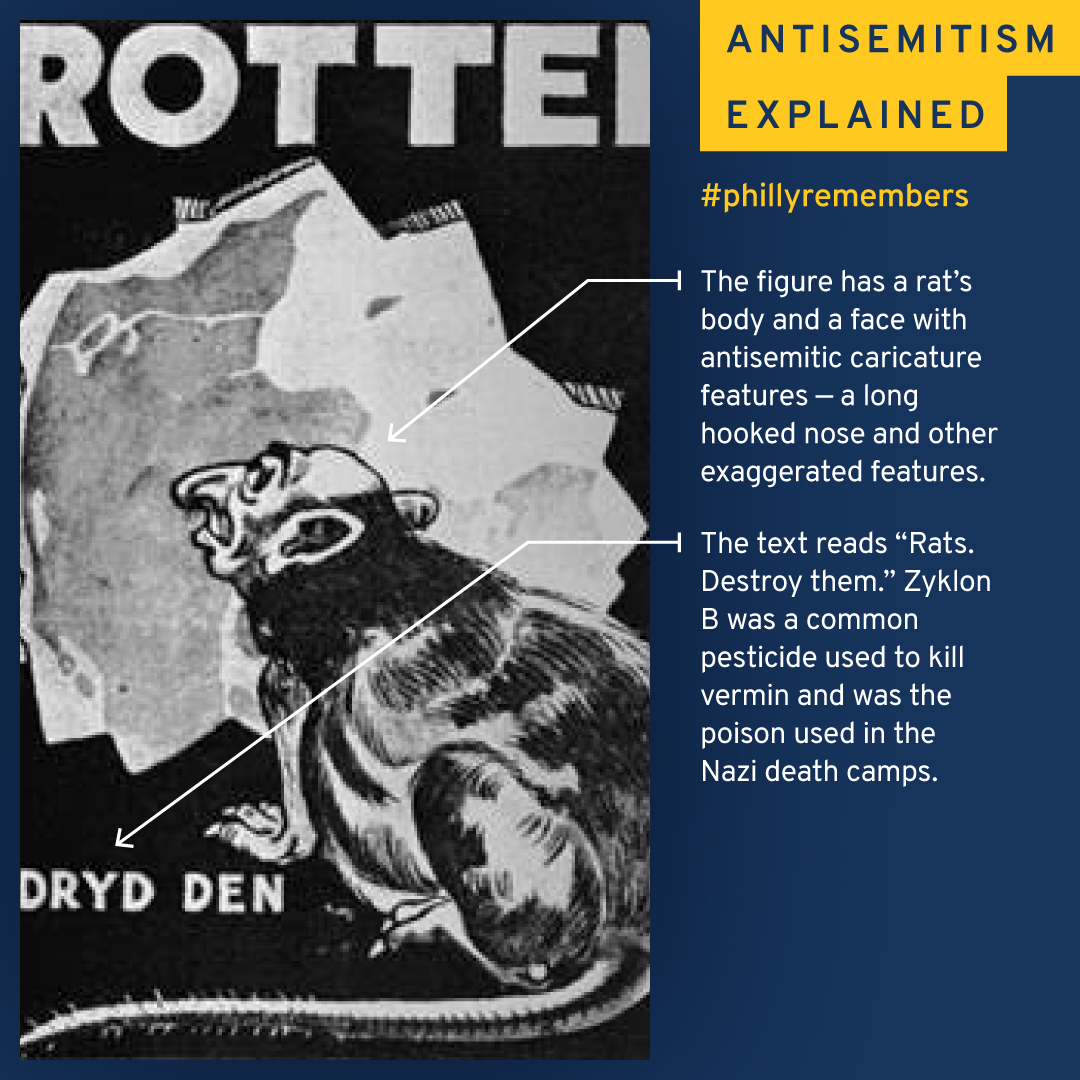 Why does racist imagery often show people of certain backgrounds as animals? Rats make us think of disease, dirt and infestation, and have been used to represent Jews in antisemitic imagery throughout history into the present. Take a look at this is propaganda poster from the 1940s when the Nazis occupied Denmark. The text reads “Rats. Destroy them.” In a Nazi propaganda film, the Eternal Jew the occupants of a Jewish ghetto are shown in tight quarters likened to rats swarming in a sewer. The statement “Destroy them” is particularly vile due to the common use of Zyklon B to eradicate rats as well as its use in the Nazi death camp’s gas chambers. 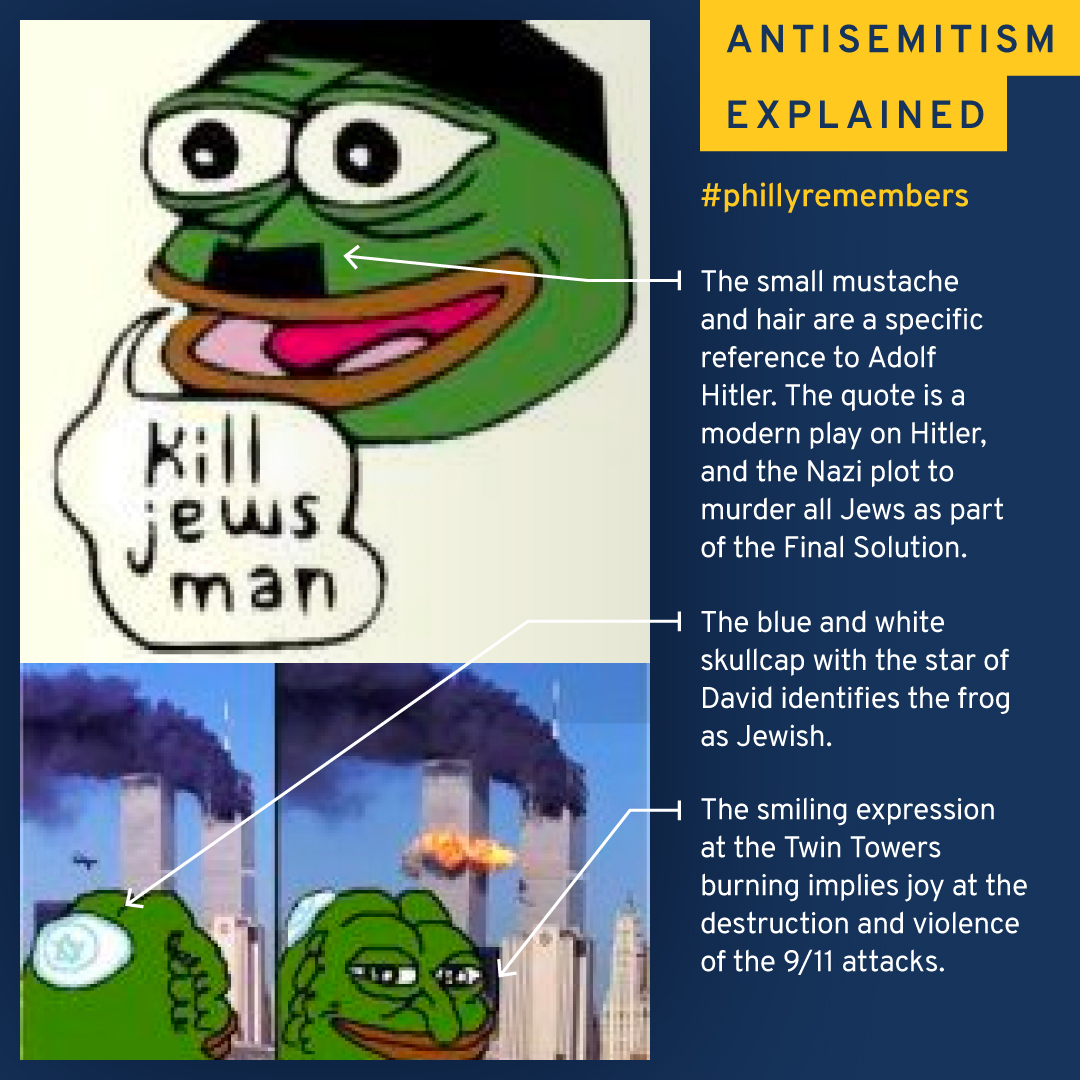 Pepe the Frog is an excellent example of a character co-opted by a hateful organization. Though the cartoon first appeared on the show Boy’s Club as a harmless character, white supremacists have since turned it into a popular meme that is racist and bigoted. In the images on the left, the frog is an antisemitic caricature with exaggerated features. Antisemitic imagery have historically shown Jews as cunning and scheming at the expense of others- the expression of pleasure at the destruction of the 9/11 terrorist attack is an example of this cruel falsity. On the right, the frog has a mustache and hair that are undeniably referencing Adolf Hitler. The added sentiment “kill jews man” is a violent antisemitic statement at any point in time- whether referencing Hitler or current neo-Nazi ideology.